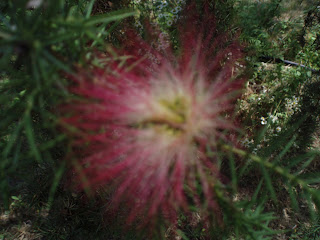 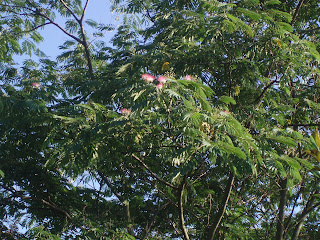 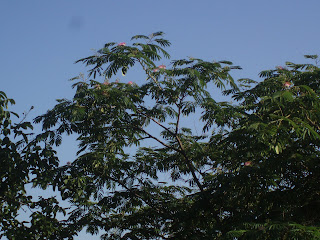 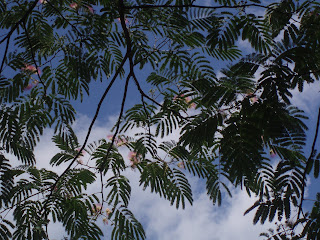 This attractive tree is at the moment in flower and I think that it looks so beautiful that I wanted to share some photos with you. Although we know it as a Persian Acacia having checked in our tree books, the locals call it 'Red Mimosa'
Posted by LindyLouMac at 6:55 PM No comments:

Life is good here in Italy and work is progressing on our renovations. I have not been able to take many photos recently as kilometres of electrical wiring, pipes for plumbing, plaster drying on walls and new concrete floors really do not make very interesting subjects.
As always and for us all time seems to fly by at an ever faster rate and I cannot believe it is already June. On the 22nd of June it will be six months since we completed on the sale of La Fenice. Last week on the 9th of this month the house here at Campo delle Rose has been ours for four months and we have been living here for three.
Having already know Marta reasonably well for the last few years it has not taken us long to settle into our new surroundings. The garden is far superior to the last one and although we have less land it is far, far more productive. We have the following produce which will keep us busy Olives, Figs, Cherries, Apples, Pears, Lemons, Nespoli, Peaches, Nectarines, Apricots, Plums, Persimmon, Walnuts, Chestnuts, Hazelnuts and Grapevines. This is without even considering the Orto which is already flourishing with Tomatoes, Onions, Spinach, Beans, Aubergine, Peppers, Courgettes, Lettuce, and Strawberries. Also let’s not forget the wild produce cicoria, wild garlic and other wild greens that are good to eat!

It is four months since I last wrote an update, for those of you without computer access (yes I do still send this to a few followers by snail mail!) I apologise. The majority of the rest of you I know have been following us via the many photographs we have posted online in the recent months so will know how we have been spending our time recently. So only the briefest of descriptions needed here to catch up with our news.
When I signed off last time we were just about to depart for a long weekend in the UK in order to attend our niece Layla’s marriage to Darren. The weather was fabulous and we had a fantastic time both on the day before and afterwards down in Salisbury for a few days catching up with family and friends. We stayed at The Bookham Grange Hotel while in Bookham the scene of our own wedding reception 37 years ago.

Since our return the renovation work has been the centre of our attention and although we are still living on a building site everything is slowly coming together. As we are doing the majority of the work ourselves with the help of our friend Nick it is going to take sometime to complete, especially as we do not particularly want to devote all our time to the project. We want to enjoy life in Marta as well now we are living here. With this in mind and the fact that it is too hot to want to work all day indoors during the summer months, we have decided that for now we will only devote half a day to inside work. Since making this decision last week it is surprising how much David and I have managed to achieve in the garden where the results of having been abandoned need sorting out. This week we have tidied up the vines, discovering that we have more than we realised, they are good to eat apparently, so we will not necessarily need to make wine!
Our neighbours have all been very welcoming and it is from them and the lady that sold us the house that we are learning all about the garden. The previous owner’s sister lives next door to us, so when she visits she usually calls on us to see what progress we are making! It is very important to her as this was her childhood home; she is our age and was very sentimental about the house leaving the family’s possession after so many years. The oldest part of it was actually built by her grandparents. Fortunately she approves of us and the improvements we are making, as she realises the place was in dire need of modernisation and that the garden had been abandoned for far too long. The neighbours have all been very kind since we moved in often calling in to tell us we are working too hard, tell us we have mail(delivered to boxes some distance from the house), generally inspect progress on the house and garden. We are always being given produce from our immediate neighbours huge Orto and we wonder sometimes why we are actually growing our own! They certainly produce more than enough for the five of them and us.

Festa season is well under way here now and since the early spring there has been something happening most weeks somewhere in the area. On March 8th it was World Womens Day and the Italian symbol is Mimosa. The restaurants are decorated with Mimosa and have special menus for the day as many people eat out to celebrate. It is traditional to give and receive bunches of Mimosa of which I was given a huge bunch by a neighbour, which I then shared with another friend. Later that month it was Father’s Day (in March here not June). In March along with three other English friends we had our own Bookcrossing Festa when we met up for lunch in Viterbo with a Finnish Bookcrosser who was on holiday in Roma. Of course it was really just an excuse for a ladies lunch but we did exchange some books as well.
In April it was Easter and we had a delicious Easter Sunday Lunch when we were invited to join our neighbours. In the Italian tradition the food seemed never ending with course after course appearing and then we were invited to stay on for supper as there was food left over. In April we also created another festa of our own and took our friends Viv and Nick to one of our favourite restaurants in Viterbo Tre Re, to thank them for everything they had done to help us with our move. Everything from packing, moving stuff in their car to feeding us every Sunday evening for weeks while we were living rough! Of course Viv’s birthday, our Wedding Anniversary and then my birthday were also further excuses for celebration. The weekend after my birthday it was ‘Festa della Mamma’ again a different date from the British one for Mothering Sunday.
On May 14th it was the annual major festa day for Marta when they celebrate ‘Festa delle Madonna del Monte.’ It is held in celebration of the abundance of crops from the lake and the land and all the different agricultural professions take part in various celebrations during the days proceeding, culminating with a procession of floats through the town. We attended the procession with Selina in the morning and then that evening we went out for a Pizza along with Viv and Nick before watching the late night firework display to mark the end of the day’s celebrations. It was certainly one of the best displays we have enjoyed and Selina and I both managed to get some great photos.
At the end of May and last weekend there was yet another festa to celebrate in Marta, this time in celebration of the Latterina (little fish similar to whitebait) when the fishermen have their catch blessed and they then prepare simple suppers of these delicious little fish available to buy along with an annual commemorative china platter. I think I will soon have quite a collection of these! We certainly always have something to do to ensure we mix with the locals and we still have various wine and food festas plus various free musical events held lakeside throughout the summer to enjoy.
There was another interesting event taking place locally last weekend, a hill climb car race, a popular event all over Italy, taking place on the zigzag road from the lake up to Montefiascone. Although we did not actually go and watch we did go and have a look at all the cars participating in the event, which was interesting.

In addition to enjoying all the local events which are now so much easier for us to attend without the fifty minutes drive home afterwards we have already enjoyed some visitors to our new home. Julie was the first when she spent five nights camping here with us in March, Auntie June and Sue briefly around my Birthday, Selina for two weeks in May with Chris joining her for the second week. It goes without saying that we had a great time with them all.

I must also mention that the birds are all the same favourites as at Vetralla. Swallows who arrived in March, soon followed by the Cuckoo, Hoopoe and Bee-eaters. In addition we have lots of other breeds including Nightingales, one in particular who for a few nights recently kept us awake!

Well as this was supposed to be a brief update I should draw it to a conclusion now and go and see if the plums (yellow early ones) are ready yet to harvest. We have already in the last month enjoyed our own harvests of strawberries, cherries, Nespoli and just yesterday we picked the fruit from the first of our two apricot trees.

Back to work now then.
Posted by LindyLouMac at 2:48 PM No comments: