There is so much more within the pages of this travel guide to Naples than you would expect as it has a personal feel to it. I suspect that this is because much of the information contained within the pages, of unusual tours and hidden nooks of Naples appeared originally on the authors blog.  The author is an American Naval wife and freelance travel writer who during a three year posting to Naples explored the city and its environs writing about it on The Espresso Break which led to this book.

This guidebook is perfect for the armchair traveller, or to tuck in your bag on your trip to Naples whether you are a first time visitor or have been there many times before. I think you might find some hidden nooks that you did not know existed! I also agree with the author's own suggestion that this book makes an excellent introduction to the newly arrived ex-pat living in Naples as many of the articles will help one understand the cultural differences. Besides ideas for the tourist Barbara Zaragoza covers topics as diverse as food, shopping and the problems of rubbish and racism. It would also not have been complete without the section on Neapolitan espresso and its history, which gives the book its title. As well as the obvious sights, Vesuvius, Pompei and Herculaneum there are many other places covered. Which in my opinion means you cannot fail to find something of interest, with her tour ideas based on different themes, such as Ancient Rome, Grottoes or Odious Women. This guide will certainly be travelling with us on any future trips to Naples.

In conclusion an unusual travel guide for those of us that like to explore off the beaten track as well as the more obvious places. I personally feel that you learn a lot more about a place and its culture if you turn off the well beaten pathways and explore the nooks and crannies.

Barbara Zaragoza was raised in a small city outside of San Francisco. At eighteen she went to Washington D.C. where she studied International Relations at The American University while interning at Capitol Hill.  During that time, she also did a study abroad in Poland right when Communism was collapsing (1989-1990), which led her to go to Prague and work for the Institute of International Relations while Czechoslovakia was splitting. She then went on to do a graduate degree in Russian and East European Studies at Stanford University., followed by a Master’s degree at Harvard University with a focus on Polish contemporary history. During those same years, she fell in love and married a submariner with whom she has three daughters.  Her husband left submarines for a Navy medical career that has included two deployments (Afghanistan and GITMO). She has travelled to five continents and has studied somewhere around seven languages. In 2007 she moved to Naples, Italy for three years  in 2007. The family now live in San Diego, California, which they consider to be home.
The biographical information and photo used in this post are with thanks to the following websites, where you can also find more information about the author and her writing.

I have posted this book review on LindyLouMac's Book Reviews but decided it should be shared here as well to reach a wider audience.
Do let me know, what you think of this idea? Last year there was interest in the reviews I posted for the   Italy in Books 2011 Reading Challenge.
Posted by LindyLouMac at 8:55 PM 13 comments: 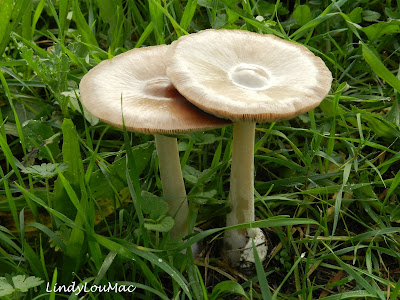 Mushrooms, Toadstools, Fungi, Funghi, whatever you know them as, many varieties are poisonous and in Italy it is advisable to take them to your local Health authority for identification before even considering eating them. In fact local authorities often run courses on identifying them, so surely it is better to be safe than sorry.

I read a newspaper article on line recently which had the following to say:
'On October 22 an entire family (father, mother and daughter) died after eating poisonous mushrooms. In Italy there are between 600 and 1,300 cases every year of poisoning.

For this reason Health Minister Renato Balduzzi warned recently that to avoid unnecessary risks, people should always bring picked mushrooms to experts for examination before eating them'.

The full article can be read by following the link.
Poisonous mushrooms destroy liver and kill!

This is why we do not risk eating mushrooms from our garden!  Apart from these which we are 200% sure about but even then we will only consume if they are freshly picked. 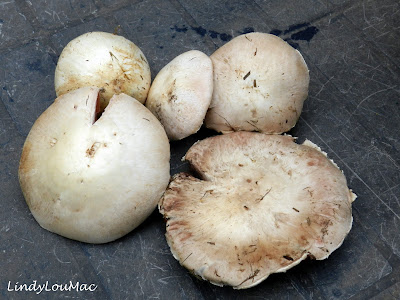 According to Wikipedia  A mushroom is the fleshy, spore-bearing fruiting body of a fungus, typically produced above ground on soil or on its food source.

In the last few weeks there have been an abundance of many different varieties to be found in our garden, some are weird and wonderful, others extremely ugly, or even a little rude!  I will share the photos here with you but no names as I do not want to be presumptuous enough to consider that I might be able to identify them correctly!

I hope you find them as fascinating as I did when I was photographing them. The photos should enlarge if you click on them individually, for a closer look! 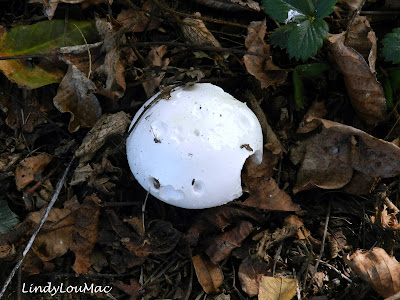 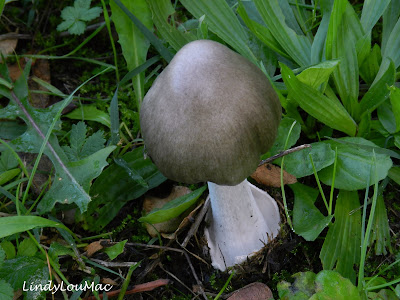 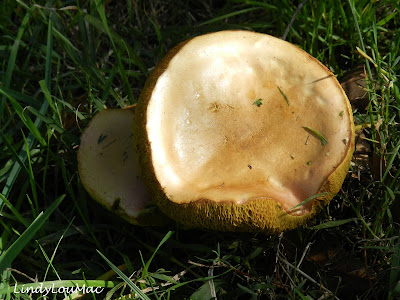 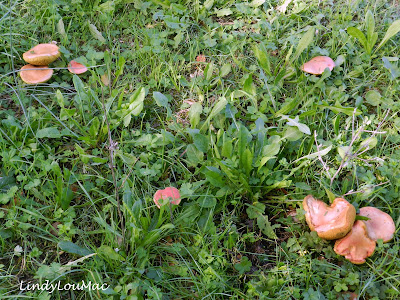 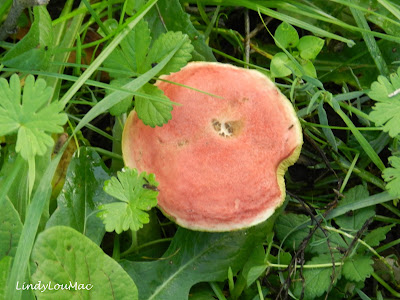 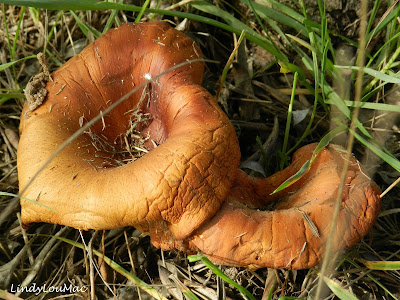 The next three photos are of the same fungus taken over a three day period, firstly day one emerging. 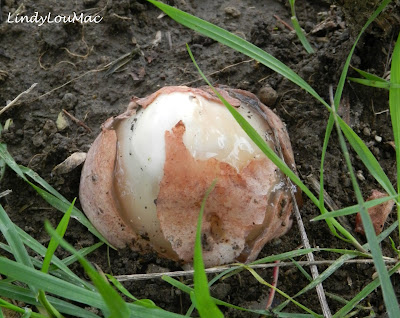 Three days later it was looking like this and appeared to be very attractive to flies! 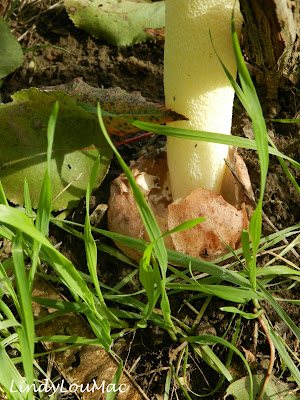 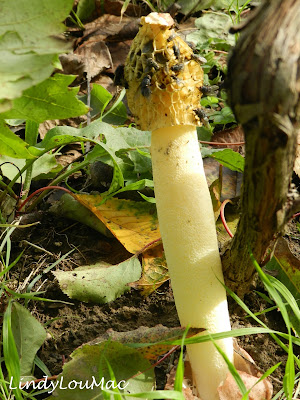 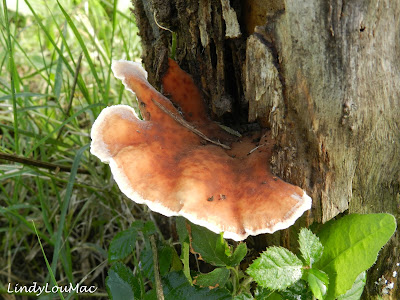 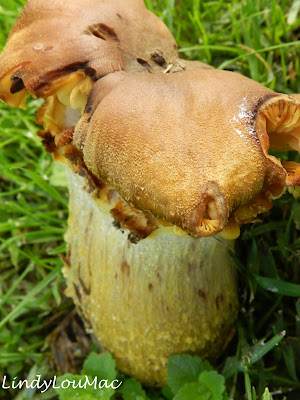 The same variety collapsed and decaying a few days later. 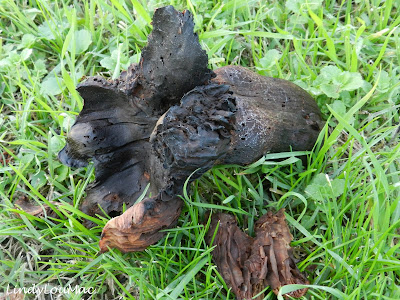 Finally I want  to try and give you an idea of the size of some of these specimens. 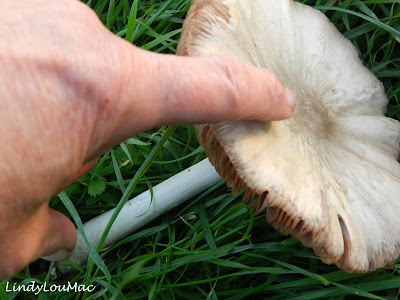 Please remember do not go foraging for mushrooms without sound advice, as many are killers!


All photos are my own taken in October and November 2012.

All rights reserved by LindyLouMac Photo Collection
The full set of photos may also be viewed individually in my album entitled
Funghi in Our Garden - Autumn 2012 at My Flickr account.

Yesterday was San Martino and I completely forgot about it, I suspect because our spell of mild and sunny weather came to an end this weekend. We had thunderstorms and torrential rain all day long, definitely a good day for curling up by the fire with a good book. I thought that those of you that are new to reading News From Italy since I last wrote about this date may be interested in some background to San Martino.

However first I have not forgotten either that November 11 is also Remembrance Day but here in Italy servicemen who died for the nation are remembered on 4 November, when the ceasefire that followed the Armistice of Villa Giusti in 1918 began. Since 1977, this day has not been a public holiday and nowadays many services are held on the first Sunday of November.

In Memory of those that lost their lives for us.

November 11th is the official feast day for San Martino - Saint Martin whom I have discovered was born in a Roman province in what is now Hungary, a Roman citizen whose father was an army officer and himself became one, later giving it up to become a monk. He is the patron saint of soldiers and wine-makers!
Historically the story goes that while he was riding at the gates of the city of Amiens with his soldiers, he met a poor, freezing beggar, cut his own military cloak in half and shared it with him. That same night he dreamt of Jesus wearing the half-cloak he had given to the poor man and thanking him for his compassionate gesture. It is also said that at the moment he shared his cloak, the sun came out and that is why in Italy, a period of sunny, warm weather with clear skies and mild temperatures of around 21C/70F, occurring during early November is called Estate di San Martino.  It seems we must have enjoyed our St Martin's summer last week then!
San Martino also happens to be the day when festas are held to celebrate the vino novello (the new seasons wine) in some parts of Italy.

In my last post I announced that News From Italy has been accepted by Expatblogs.com as a contender for one of their awards. Thanks lovely followers for the tremendous support you have given me, by leaving such wonderful comments at Expatblogs.com in support of News From Italy, I am so touched by them.

I am very excited to announce that News From Italy has been accepted by Expatblogs.com as a contender for one of their awards. May I please ask you to leave a comment there about News From Italy? This would be very much appreciated and help to improve my blogs rating.Thanks lovely followers. :)

I have also shared the photo below on my photography blog today, LindyLouMac's World in Photographs but I know that not all of you have time to call by there very often, so sharing here as well.

An Autumnal favourite of ours, that we were able to enjoy freshly roasted in an open fire over the weekend. 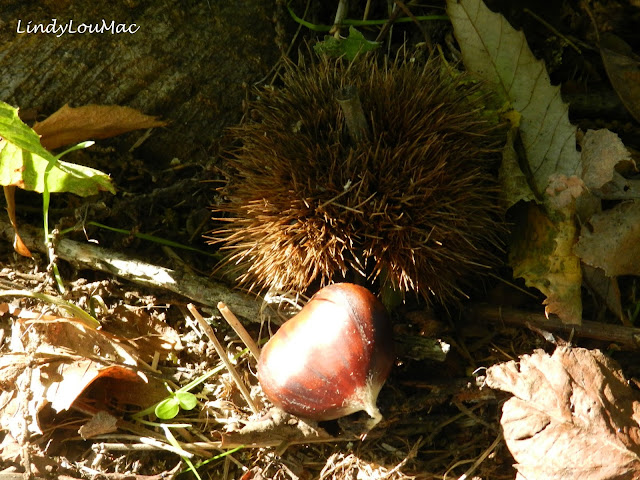