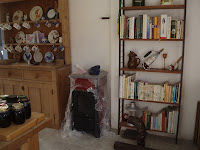 Winters in Italy can be surprisingly cold and many Italians use a wood burning stove (stufa) to make their homes cosy during the chilly winter months.
Having had experience of the benefits of a  wood burning stove at our last house we decided to install one in the kitchen at Campo delle Rose. 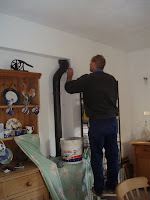 Although the weather has been glorious during this last week we have already had a taste of the cold to come and were extremely pleased when our Nordica stufa was delivered on the 19th of October, it was installed and lit the very next day as it was decidingly chilly. We were very grateful as until the radiators are installed it is our only form of heating downstairs. 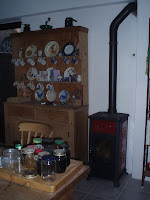 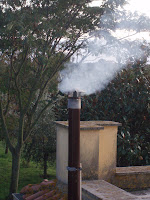 Thankfully the weather has returned to normal since then and we have been enjoying sunshine and 20C but at least we are now prepared! 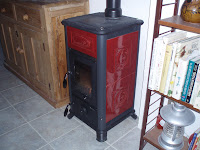 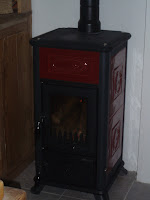 Posted by LindyLouMac at 8:58 PM 4 comments: 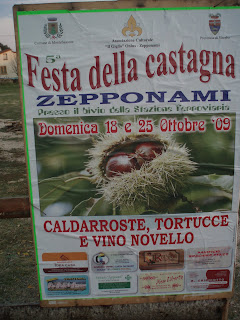 Chestnut Festa makes the arrival of autumn bearable! We went with our friends Viv and Nick to the one held in Zepponami, Montefiascone.


We enjoyed Caldarroste Castagna,(Chestnuts roasted in the open fire) Tortucce, (a type of dough that is eaten sprinkled with either salt or sugar). Delicous either wayand Vino Novello to drink, the first of the new seasons wine. 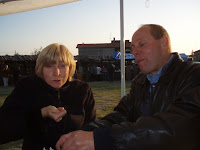 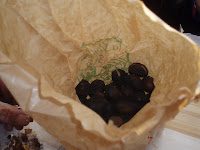 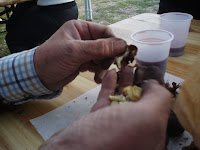 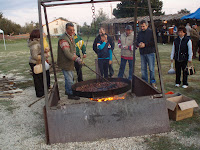 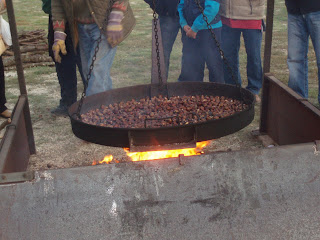 Posted by LindyLouMac at 7:27 PM No comments: 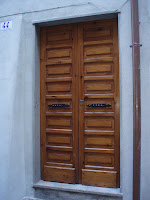 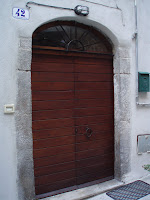 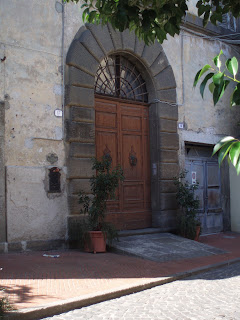 While my sister Julie was visiting we took the opportunity to go on a photographic walkabout in Marta. She was snapping away for artistic inspiration while I was doing so just because I liked the look of something be it architectural or plants.  As it happens the majority of my shots seemed to be doors, possibly something to with the fact that is what is currently top of the list in our renovation project. David has removed the front doors which were a hideous dark brown and has stripped them back to the original wood. Also working on the metalwork half moon over the soggiorno(sitting room)door. The photographs were to help us with trying to get an original and local look.

I will post some before and after photos here in due course, but for now I just want to share some of

the door photos from our Architectural stroll around Marta. 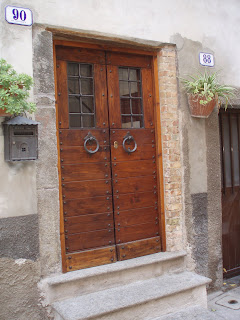 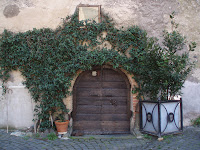 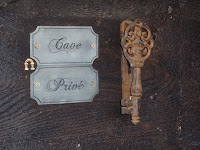 Posted by LindyLouMac at 9:08 PM No comments:

Sicily olives to the press

Sicily olives to the press


The Olive Harvest is starting in Italy and we expect to be doing our own harvest within the next month. This is an interesting video about the process. Many of you will remember some similar photographs from our previous harvests when we were living in Vetralla.
Posted by LindyLouMac at 5:31 PM No comments:

Julie decided to come out to for some R and R when a planned trip was cancelled. Having already booked absence from work to go away she decided to come out to Casa Piccola instead. It was lovely to have her just a few minutes down the road, we saw each other every day but she also had her independence. This gave her plenty of opportunity to do some sketching and painting, a talent we do not share.

The time of course passed all too quickly but we enjoyed some quality time together both here at Campo delle Rose, local eateries, shopping (for clothes of course) and a visit to San Martino nel Cimini.

A trip to a Chestnut Festa had been the intention, only that was on in  Soriano al Cimini, the other side of Viterbo. I had been convinced we were going to the right place as San Martino was where we went to one last year!

Posted by LindyLouMac at 6:48 PM No comments:

Over the last week or so it has turned very cold in Italy, unseasonably cold for what is supposed to be autumn. Temperatures, throughout Italy are well below what we have come to expect at this time of the year, thanks to a cold front from Siberia apparently!
We are not ready yet for winter as we do not have fully operational central heating yet and are still waiting for a new external door on the soggiorno (living room) and for the front door to be rehung after stripping back to the natural wood. Oh well at least the kitchen is nice and cosy as the Stufa was delivered two days ago and fitted yesterday, now fully operational. Also the central heating works in our bedroom so this is where we retreat to watch television after supper. 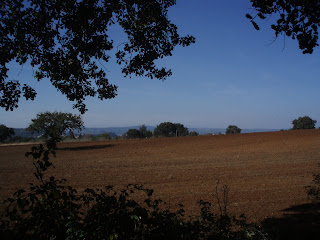 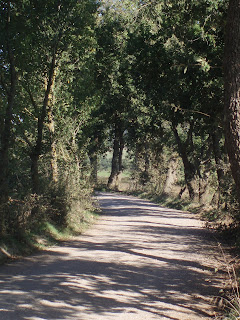 The only good thing about this intense cold has been the amazing blue skies and the sun making the countryside look so beautiful.
It makes one realise how very lucky we are to have such beautiful countryside to walk in just outside our own door. I am posting here photos, just a taste of the scenes viewed on some recent walks. One in the countryside in the hills behind the house and the other on a lakeside walk to Marta. 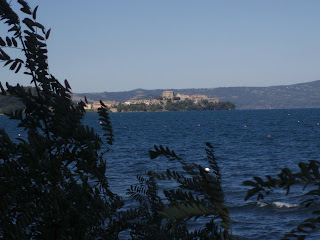 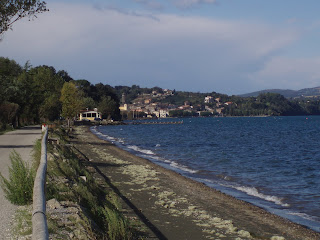 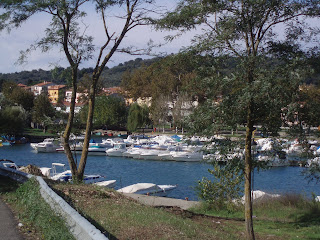 If you are interested there are many more such photos posted on My Flickr.com account.  http://www.flickr.com/people/mctumble/
Posted by LindyLouMac at 5:08 PM 3 comments:

The Saga of the Postbox 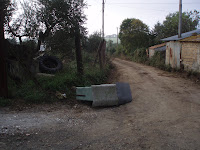 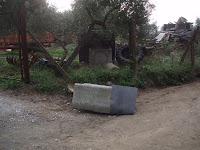 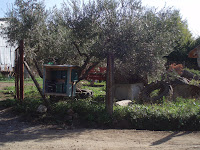 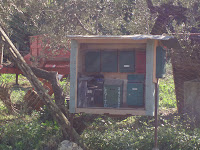 In Italy in rural areas it is not unusual to have to collect one’s mail delivery from a bank of mailboxes located in the vicinity of a group of properties.
This was a new experience for us when we moved to Campo delle Rose as although we lived in the countryside in Vetralla the mail was delivered to the house, well almost, actually a box at the end of our drive. As it was a long drive we were pleased to discover the postbox here was no further away, located in a sheltered spot on our neighbour’s property. He had built a shelter for the boxes so that larger letters and parcels which will not fit in the boxes can get some protection from the rain, important for me as I receive lots of books!
The only down side to this arrangement was one of the neighbour's dogs that is not always chained up and very protective of his owner nipped me enough to bruise me the first and only time I made a solo trip to collect the mail. I have never been confident with dogs and since then will only go to collect the mail on foot if the dog is chained up, even then I am not confident as they are very long chains and I am never quite sure how safe I am! It is not just me, as our neighbour Stefanie is also very wary.
We therefore thought it was maybe good news a few weeks ago when we received a letter from two of the other postbox owners to say that in short the postboxes were to be removed elsewhere. There were a number of possibilities listed in the letter, either everyone involved was to demand that Poste Italiane delivered to our individual properties or the shelter was relocated. It turns out that this letter is part of an ongoing family dispute between two cousins which I will not go into here as it is none of my business. We have all been informed by the neighbour who owns the land where the boxes are located that the letter was too be ignored and that there would be no changes.
Unfortunately the situation escalated recently when the other cousin, who by the way does not even live in this commune, arrived secretively one morning loaded the postbox shelter on to the roof of his car and very hurriedly relocated it to a position opposite our road entrance. When this was discovered lengthy discussions were held amongst the owners of the postboxes, as this particular gentleman had no rights to do this, they are our property not his etc, etc. We nod knowingly and agree to whatever the neighbours decide to do, after all this is not our war. Anyway something will have to be done as apparently you cannot just locate postboxes wherever you fancy there are rules and regulations.
The shelter had been hastily and precariously relocated and it did not even survive its first night in its new but possibly temporary position. The next morning it was on the ground causing yet more problems as it was now a hazard in the narrow lane and junction. If an accident was caused it seems that the postbox owners are the liable parties. This of course caused even more concern amongst the neighbours, photographs were hastily taken and consultations with Poste Italiane intensified. The inspectors have now been to look at the location and we believe it has been declared as unsuitable, but there it stays until situation resolved.

The situation now is that the gentleman concerned has received a legal communication from his cousin to reinstate the postboxes and shelter to their original location within a set period of time.

We await further developments!
Posted by LindyLouMac at 4:23 PM 1 comment: 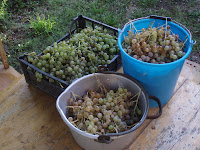 All around us for the last few weeks our neighbours have been harvesting their grapes.

We have been given a bottle of both our neighbours red and white wines for 2009, to sample in a few weeks time when they are ready to drink.

Our own grapevines were somewhat neglected this year as rather low on our list of priorities.

In fact this picture shows our complete crop, which I harvested one afternoon recently.

They have now been made into what has turned out to be the most delicious grape juice.
Posted by LindyLouMac at 12:06 PM No comments: